Last night I was making some more Hand Made postcards and I realized they take a long time. My hat is off to Mim and her 365 day mail art project. What I have been hoping the Lucky Strangers would do is interact with the postcards a bit more than writing a message.

What has been returned so far is great. There is a variety and originality I did not imagine. Still, I’d like us to have a higher level of interaction.

The two returns from the Potato Print Postcard Party both had delightful drawings added by the people who found them. How does one get more of those? I think a person has a playful expectation when they see a hand-made postcard. A photo of a person seems rather ordinary. It invites only the generally accepted mode of postcard engagement. 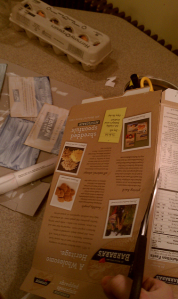 Cut up some cereal boxes and paint them white

I grabbed a stack of cereal box cardboard, sliced it up and painted it white. By putting one sticker on the front and adding a little sketch with plenty of white space I reasoned a Lucky Stranger would jump right in.

About the time I had cut out the picture of the elephant, stuck it on and added some active lines, I began to brain storm. I have been having a discussion about found art and audience interaction with Rosa Murillo. What if she included an envelope and asked the people to add something and return it to her and she would incorporate it into the next piece of found art? Or better yet, why not prime the pump and give the person a starter kit? 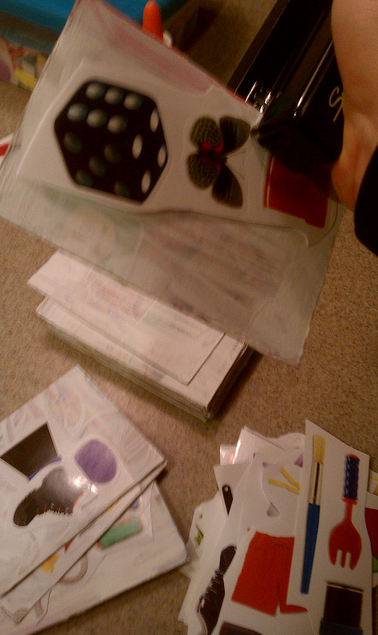 I took one of my children’s sticker books and cut out 30 groupings of stickers with 3 stickers in each grouping. I stapled them to the front of blank postcards. Soon I will add a label and postage on the back. I’m thinking of including a slightly altered message like, “please create something and return to me.”

For a complete gallery of all the PDK postcards, go here.