I have a stack of postcards to post here. The past week has provided 18 returns and 2 unsolicited postcards. My original fears of people disregarding Business Reply Mail postcards as junk have subsided.

This card is from the 4th Batch sent out in February. Mia was the volunteer as indicated by her zodiac symbol up by the fox stamp. I don’t know when she placed it but it looks like she placed another one around the local Vancouver theater scene. 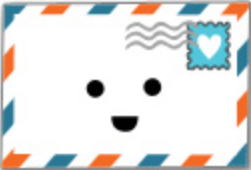 I go away for a couple of days and BAM! The Swap-bot blog gave Return2.Me a little mention this past Friday. Thank you so much! Many new visitors have come over and checked the site out. I hope you like what you see.

I have only completed one swap and I’m signed up for another. One of the volunteers here tells me that it is quite addicting. Sounds like it’s the right place for me.

It took almost 3 weeks but @Live_Vancouver received his packet of specialized, Truly Beautiful 2.0 postcards. He has been placing them around his town and giving them to some friends so they can place some too.

The difference with these cards is the finder keeps the postcard and is asked to leave a comment on a special page here telling where they found it. Somebody has been picking up the cards because when the volunteers circle back a couple of hours later, the cards are gone.

So far no comments have been left. Perhaps closer to 20 postcards will need to be placed before just one garners a response. That would match the ratio of the physically returned postcards. Those in the Vancouver area, keep an eye out for them.

As a sophomore in high school I wrote a report on the cicada for my biology class. They are fascinating insects. After gestating under ground for 16 years, sucking tree sap from the root, they emerge to live a few short weeks to mate and continue the cycle.

They make a melodious, haunting sound once they are above ground. Read more about it on Wikipedia.

I like the low-down perspective of this one. It looks enormous like a tank topping a hill. 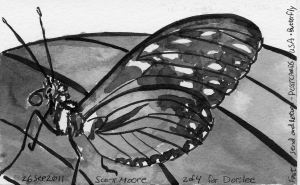 Hmmm. This butterfly only has 4 legs. Here is the second brush and ink postcard for my swap due the 30th of September. When I see that little fella’s proboscis I think of the curly sippy straws I used as a kid. I’d drink cherry Kool-Aid with it so I could see the colors whiz around. I wonder if butterflies can see the nectar moving through their long snouts.